Kothaligad is a small funnel fort near Karjat (Maharashtra). The fort is also called “Peth Fort” because of its vicinity to Peth village. Unlike other funnel hill forts, the pinnacle or the funnel is carved from the inside, forming a circular staircase that reaches the top. The superlative view from the top of the pinnacle combined with this unique and awe-inspiring engineering feat deserves a visit. 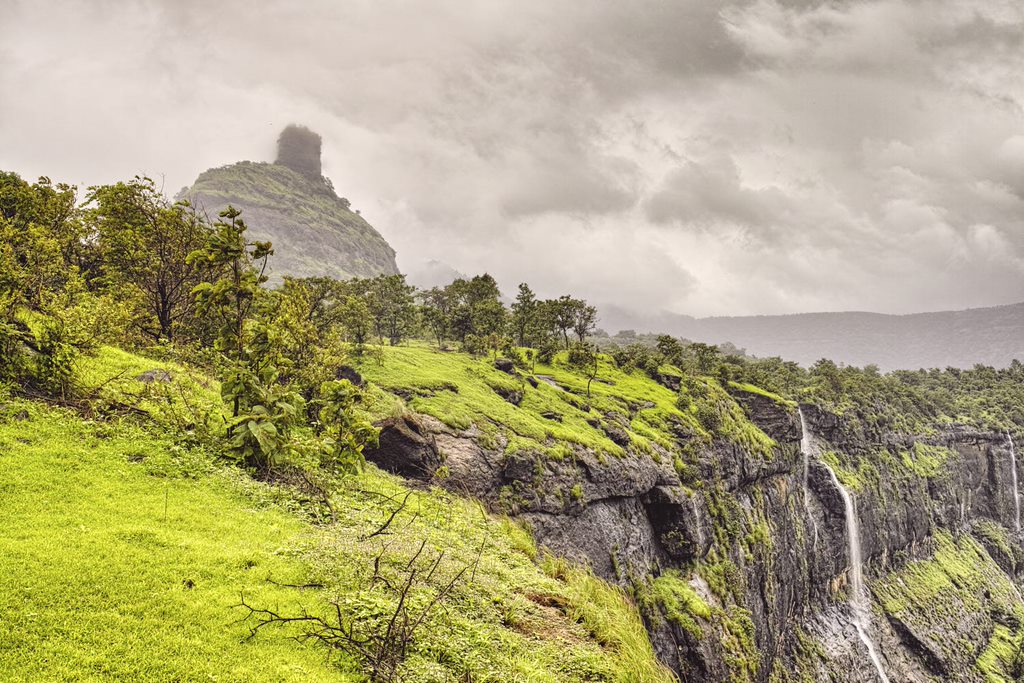 Kothaligad is accessible via a moderate 5.6 kilometre/3 hour trek starting from the road head at Ambivali village. A dirt road connects Peth village to Ambivali and this makes Peth village accessible with a motorcycle or a four-wheel-drive vehicle. However, I recommend walking to Kothaligad because there are some stellar view points along the way.

Peth is a small plateau, with a prominent funnel-like pinnacle on the top. The pinnacle called Kothaligad, is a watchtower or a fort, depending on your interpretation. Because of its strategic elevation and location, the fort has passed many times between Maratha and British hands. Till 1862, the British held this fort as an outpost for vigilance. As with most Sahyadri treks, the best time to visit Kothaligad is during the monsoons. The interplay of clouds and waterfalls along the plateau walls is the best in this season. During the monsoons, the pinnacle is usually draped in clouds and you might have to wait for gaps in the cloud cover, to be able to peek at the countryside. An early start gives a better chance of viewing and photographing the surrounding countryside.

The drive from Nerul to Ambivali via Kashele is sublime. There is hardly any traffic and the road passes through some sleepy hamlets and eye-catching rural landscape. Ambivali is a large village with a number of shops and restaurants. On reaching Ambivali, we were surprised to find that a dirt road connects Ambivali to Peth village. This road is accessible by a motorcycle or by using a four-wheel-drive vehicle. This meant that we could take our Maruti Gypsy to Peth village if we wanted to. Yet, we decided to complete this stretch on foot because a) a walk is a better way to explore the surroundings and b) it makes the trek report more relevant for people who plan on taking public transport till Ambivali village. With this in mind we parked the Gypsy in an open space at the Peth – Ambivali bifurcation. Walking up the motor-able Peth road is a doddle and there is a small step waterfall along the route that should not be missed (see Trek Details and GPS logs).

Peth is a prosperous farming village with running water and electricity and extremely likeable, friendly villagers. We reached the village in a heavy monsoon shower. As we stood huddled under a villager’s hut waiting for the rain to ease up; the house owner promptly handed us a towel to dry off and asked us to keep the towel as we would need it on our trek to dry off. It is these small gestures of generosity, often made by the poorest people, that help redeem our faith in civilisation. Rural India still has a heart and that heart is huge.

The climb from Peth village to Kothaligad fort is steep yet beautiful. The trail ascends along the North–South axis of the plateau and this route provides a bird’s eye view over Bhimashankar plateau and rock walls. With every metre ascended the view keeps getting better and better. There are a series of caves and a rainwater cistern at the base of the fort. The first cave is small and it has been transformed into a temple dedicated to the fort deity. The next cave is surprisingly large and well-crafted. Carved in solid rock with a series of windows cut out for light, this cave has a level floor and can accommodate 30 people. This is a perfect camping place if you do not mind the occasional screeching bat or mouse critter. The stone pillars and door sills in this cave are carefully carved yet poorly maintained. This large cave leads on to two other smaller caves. These small caves are windowless and thus they are damp and dark. The pungent smell of bat shit and rat droppings gets more nauseous as we dwell into these smaller caves. 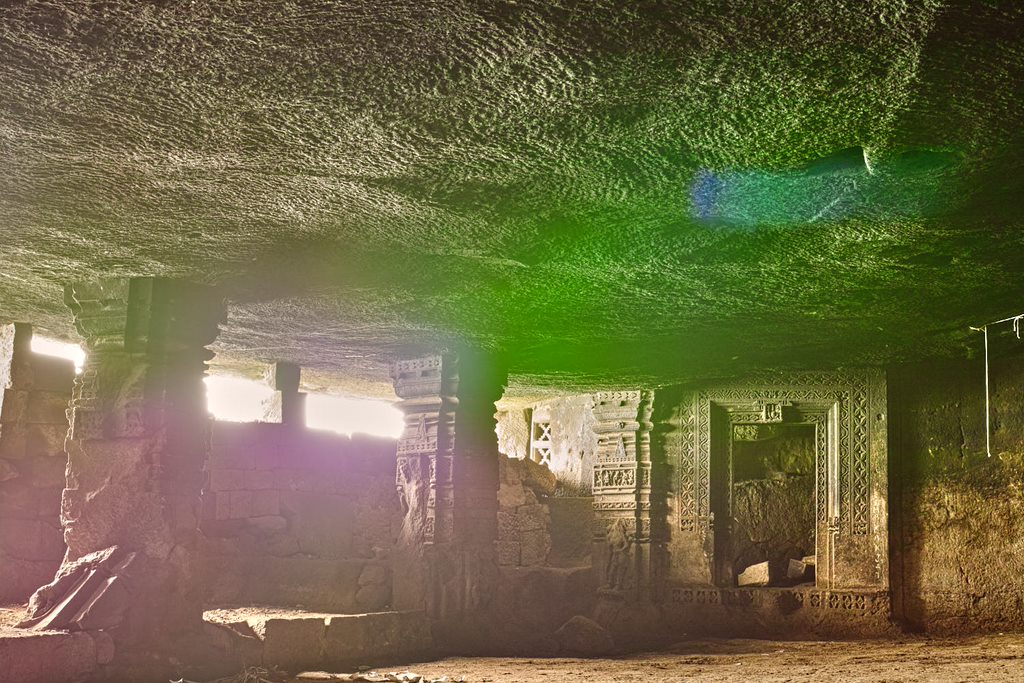 Just before the temple cave is a series of steps carved in stone that lead up inside the funnel. A total of 87 complete and partially broken steps hug the funnel and lead to the top of the funnel. The steps have weathered in a few places, yet the engineering involved in creating this manmade marvel is admirable. A rather large water cistern and a few trees dominate the small plateau top. However, the view from the top of the plateau is nothing less than extraordinary. Kothaligad is detached from the main range and the pinnacle provides a panoramic view over the surrounding area.

A group of village dogs accosted us on our way back to Peth village. These dogs were only too happy to escort us back to our parked Gypsy. Before leaving Ambivali we recommend trying the Poha at Hotel Kothaligad. Hotel Kothaligad is a small family-run establishment and the lady of the house makes and serves excellent Poha topped with fresh tomatoes, chillies and grated coconut.

The trekking route to Peth or Kothaligad fort starts at Ambivali village. At Ambivali village, near hotel Kothaligad, a road bifurcates from the main Ambivali – Jamrukh road and leads on to Peth. This road to Peth starts as a metalled road and then deteriorates to a dirt road after 700 metres. Take a left on the first Y junction and you are on your way to Peth village. The gradient of the trail steepens after the dirt road starts. Climbing the first kilometre along the dirt road is dreary as there are no views in either direction. 1.7 kilometres from the starting point, a narrow trail breaks to the left of the dirt road and this leads to a gurgling stream washing over a small set of rapids. This spot next to a stream is an excellent place for a picnic, a quick bath or for a short rest. 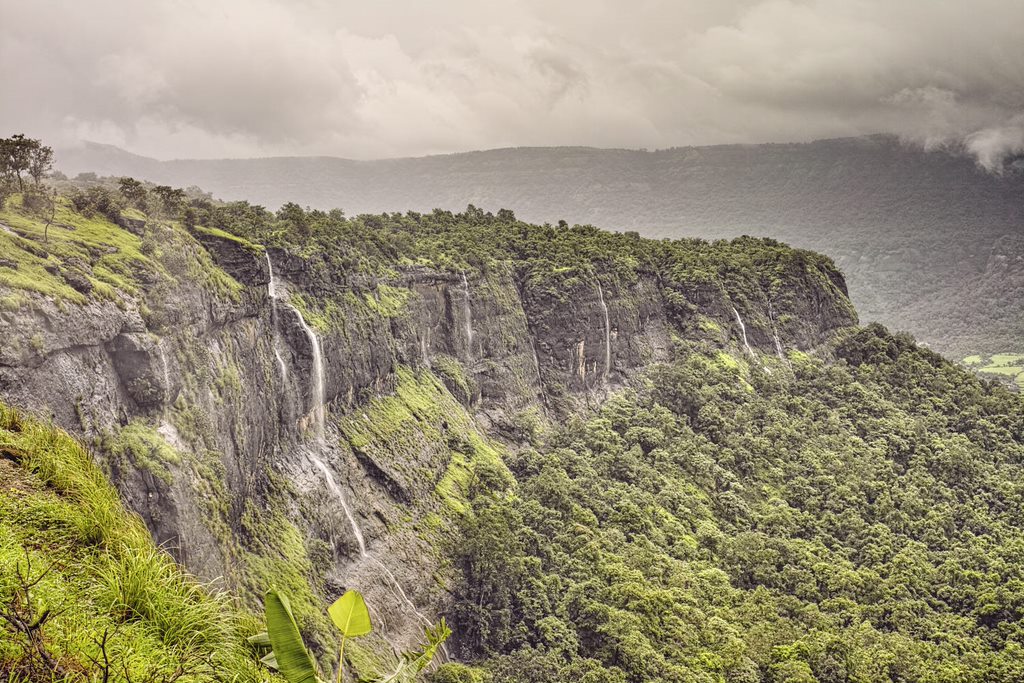 2.5 kilometres from the starting point the road emerges to the edge of the plateau and at this point, you get a stunning view of Peth village topped by Kothaligad fort. The gradient tapers off after the viewpoint and it is a gentle two-kilometre ascend along the plateau to Peth village.

The real climb starts once you leave the village behind. The trail narrows substantially and the terrain turns wild and rocky. Shrubs and trees press in the trail from all directions. Still, these trees are a blessing if you go trekking on a sunny day as their shade is most welcome. A trickle of water covers most this trail during the monsoons and this makes the rocks slippery and treacherous, especially while descending. Peth village draws its water supply from the fort and a steel water pipe links village to a cistern near the fort. The 1.5-kilometre trail from the village to the fort meanders around this water pipe. The trail zigzags up over loose rocks and scree. In a couple of places there are footholds carved in larger rocks. Be careful on these large rock sections as they tend to be more treacherous. In such places, you may use the steel water pipe as a handrail for ascent or descent. Just before the cave at the fort base the trail gradient tapers off and that is a sign that you have reached your destination. 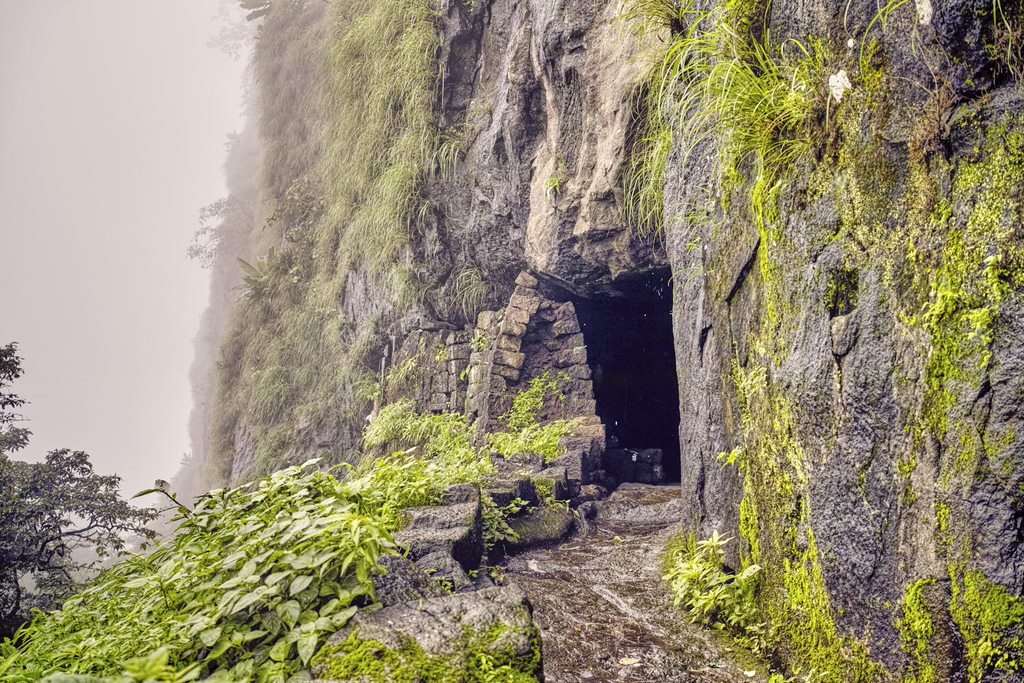 From the base cave, a series of steps carved inside the funnel lead on to the top of the pinnacle. There is a small section along the side of the funnel where a few steps have weathered and broken down. It requires a bit of scrambling using your hands to get through. A small slit in the funnel next to the weathered steps gives a magnificent birds-eye view over Peth village. Follow these 87 steps to the pinnacle. A large carved rock water cistern dominates the plateau. The water in this cistern is non-potable unless you use a portable water filter like a lifestraw (my review). 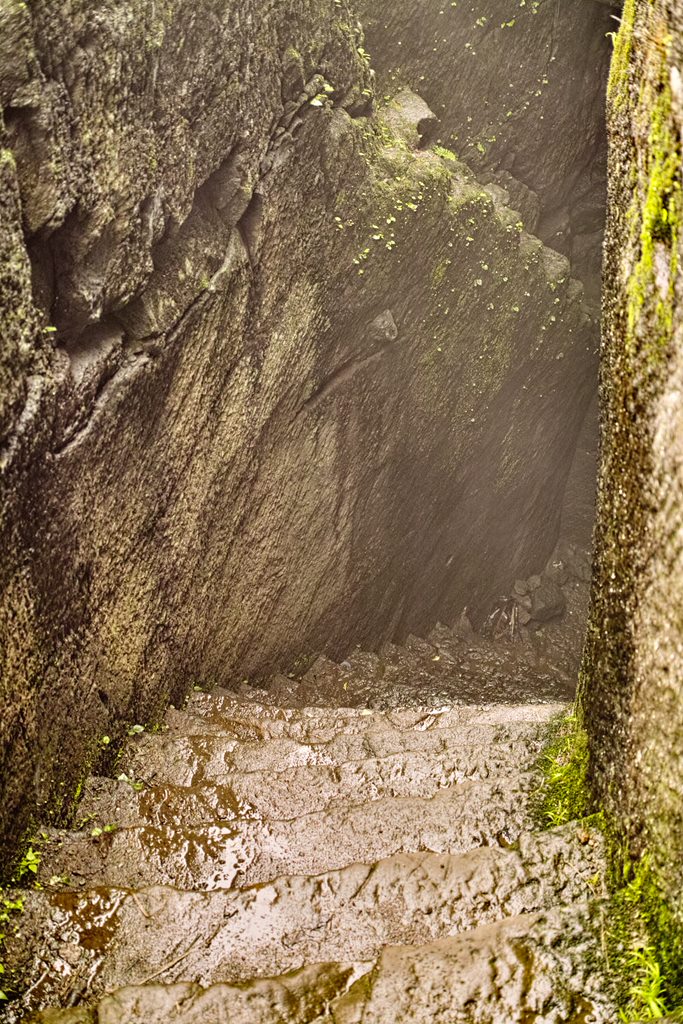 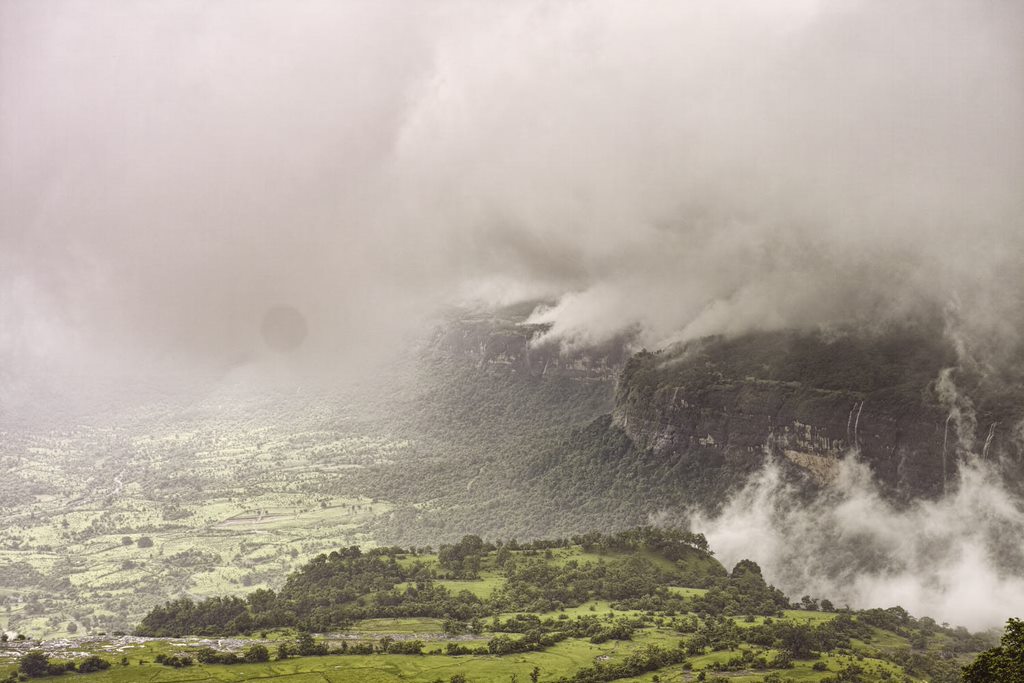