Colossal vultures, a tiger decked temple, majestic peaks and mesmerising views. The trek from Patnitop to Sudh Mahadev is firmly etched in my memory for all these reasons. This moderately difficult trek connects Patnitop with a historical temple at Sudh Mahadev.

The route hugs the Shivgarh ridge between an altitude of 2500 to 2700 metres. Shivgarh ridge is home to a few families of the near-threatened, Himalayan vultures. Himalayan vulture is a huge vulture and is perhaps the largest and heaviest bird found in the Himalayas. Their weights may vary from 8–12 kilograms and they may achieve a wingspan between 8.4 and 10.2 feet. These vultures nest in inaccessible rocky crags along the ridgeline.

Indian Vulture Crisis
In the 1980s it is estimated that there were as many as 80 million white-rumped vultures in India. However, between 1993 and 2003 their population declined by 99.7%. The reason for this decline was discovered in 2003 by Dr. Lindsay Oaks and his team to be diclofenac. Diclofenac is a common anti-inflammatory drug administered to livestock. The drug is fatal to vultures, and a vulture is exposed to a mortal dose of diclofenac if it eats from the carcass of an animal that has been treated during its lifetime. It is believed that the Himalayan Vulture is less affected by this crisis because it is exclusively mountain-dwelling. No recent study has been conducted on how diclofenac has affected the Himalayan vulture population.

So take a moment to savour the flight of these giants. When you stare at their colossal girth, it seems almost impossible that these massive birds can soar let alone fly. However, they do soar over the ridge in absolute majestic aplomb. The best time to see these birds is late morning or early afternoon after the sun has warmed up the air with enough thermals to support their soaring.

The star attraction of our trek route is the Chamunda Mata temple. This small but attractive temple situated at a height of 2788 metres, commands a mesmerising view. This is also the highest point of our trek. Standing near its entrance you can see the Chenab river winding its way to Doda. In the South, the ribbon of tarmac enveloped by green grass is the now disused airfield at Mantalai . Late afternoons and early evenings are the best times to savour these views. Do take the time to admire the wooden tiger on the roof as it stands crouched, guarding the entrance.

Brammah I is particularly notable both for its huge rise above local terrain and for it being the site of the first successful major climb in the Kishtwar Himalaya. Famed British mountaineer Chris Bonington, along with Nick Estcourt, and aided by the Indian Institute of Skiing and Mountaineering, made the first ascent of Brammah I in 1973 via the Southeast Ridge. Estcourt notes that “it is not the highest peak in Kishtwar, but it is the most obvious and elegant.”

The trek ends at Sudh Mahadev temple. Believed to be 2800 years old, This temple is one of the oldest Shiva temples in Jammu & Kashmir. In the premises, there stands a Trident (Trishul) that in the local dialect is called ‘Gaja’. The sacred Trident has inscriptions in an ancient manuscript that are yet undeciphered. Although photography is prohibited in the temple premises, we were given a carte blanche to photograph for a few minutes resulting in this rare photograph of the temple. 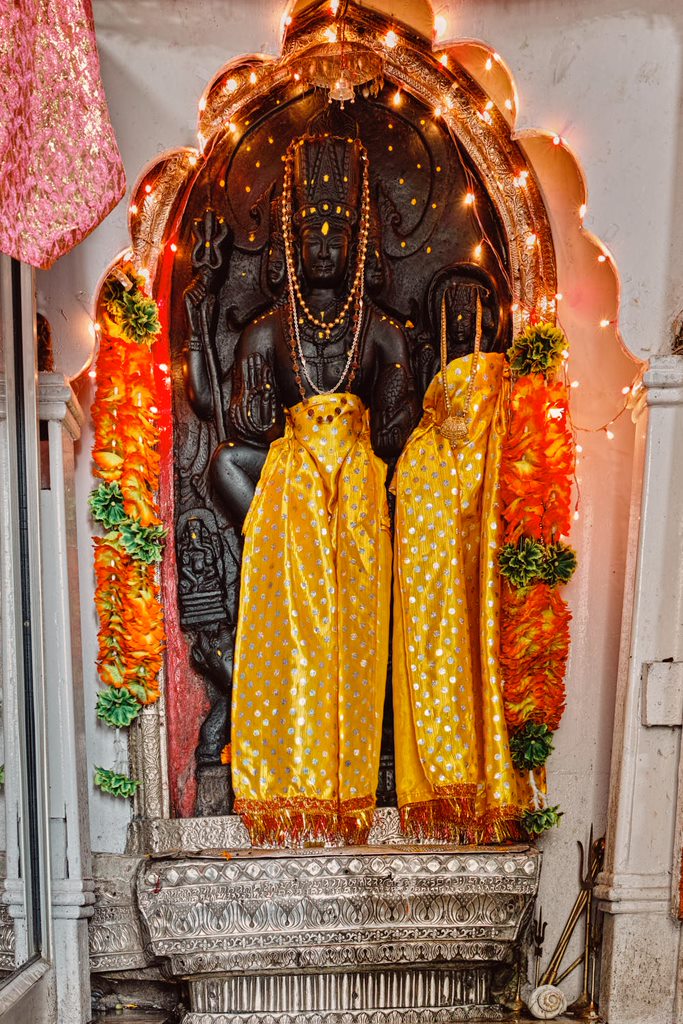 The trek starts at Hotel Green Top in Patnitop. Follow the water pipes through Patnitop woods as they ascend to a grassy knoll. From this knoll follow the rocky trail to your right. This trail stays below the unnamed ridge and it follows the ridge to a meadow. These rocky crags along the ridge are the best place to enjoy the soaring vultures. From the rocky crags the path follows the ridge line along a grassy meadow to a shallow rainwater pond. The temple dedicated to the deity, Chamunda Mata sits majestically over the knoll overlooking the pond. From the temple descend to the pond and rejoin the trail as it defends gently to a small cluster of houses. From these houses take the trail that descends rapidly through a fir forest at a nullah (mountain stream). Follow this nullah downstream. The stream joins the Chenani-Lati road near Sudh Mahadev town hospital. The temple is 200 meters on this road to your left.