A winter trek to Triund is can be an easy or moderately difficult endeavour depending on the amount of snow that season. Triund is a 6-kilometre trek over a wide and well-marked trail. Nevertheless, a winter ascent comes with its share of challenges.

Despite its recent commercialisation, Triund remains the best vantage point for Dhauladhar gazing and peering over the Kangra Valley. This is especially true for harsh winters when we can have the entire meadow to ourselves. Situated at an elevation of 2810 metres, Triund is a long exposed ridge covered with grass and it is the best known day trek around Mcleodganj. Most travel web sites recommend visiting Triund during the summers but I digress. In January and February, it is not uncommon to have the place all to yourself and that makes this trek very lucrative in winters. Stargazing on a cold winter night is one of the best reasons for visiting Triund in the winters. Mun, Camel, Rifle horn, Two Guns, Slab and Dromedary Peak are just some of the peaks that dominate the skyline under a bright umbrella of stars on a clear night. The night also reveals the twinkling lights of the twin cities of Dharamshala and Mcleodganj.

This winter has been very severe and January felt like the best time to visit Triund as it lay desolate and covered in a mantle of snow and ice. One tea shop en route and another one at Triund were still operational, while the others including the one at Snow Line had shut down because of snow and cold temperature. Nevertheless, the most memorable moment of this trek was watching the sunrise over the Dhauladhars and into the Kangra Valley. The early morning sun lights up the sky in mellow yellow, which changes to bright orange and then on to an angry red. The mist that envelops Kangra Valley parts like a curtain being drawn apart on a stage, and the valley shimmers and appears out of a hazy nothingness like a conjurer’s trick.

The starting point for the 6-kilometre Triund trek is Galu Maheshwari temple near Dharamkot. The trail is a wide, well-marked and well-known mule path and there is no bifurcation en-route. Most of the trail catches the sun in the day and this keeps the trail relatively snow-free. Nevertheless, heavy snowfall can block this path for a day or two.

The trail starts with a gentle climb from Galu Maheshwari Temple till café Magic View. The café is rightfully named because of the beautiful view it affords over Kangra Valley. This café is halfway in terms of distance but it is almost a third of the way in terms of effort. After Magic View café the climb gets a tad steeper and it ends in a steep one-kilometre stretch through a forest of Deodars and Rhododendron. This final stretch through the woods is known as 22-curves, because of the 22 switchbacks that one has to climb to get to Triund. A word of caution though; this last kilometre of wooded section receives no direct sunlight and therefore snow turns into ice along the path which can get very slippery. Be careful on this section of the trail especially during early morning descents. This is when the ice is at its slipperiest. 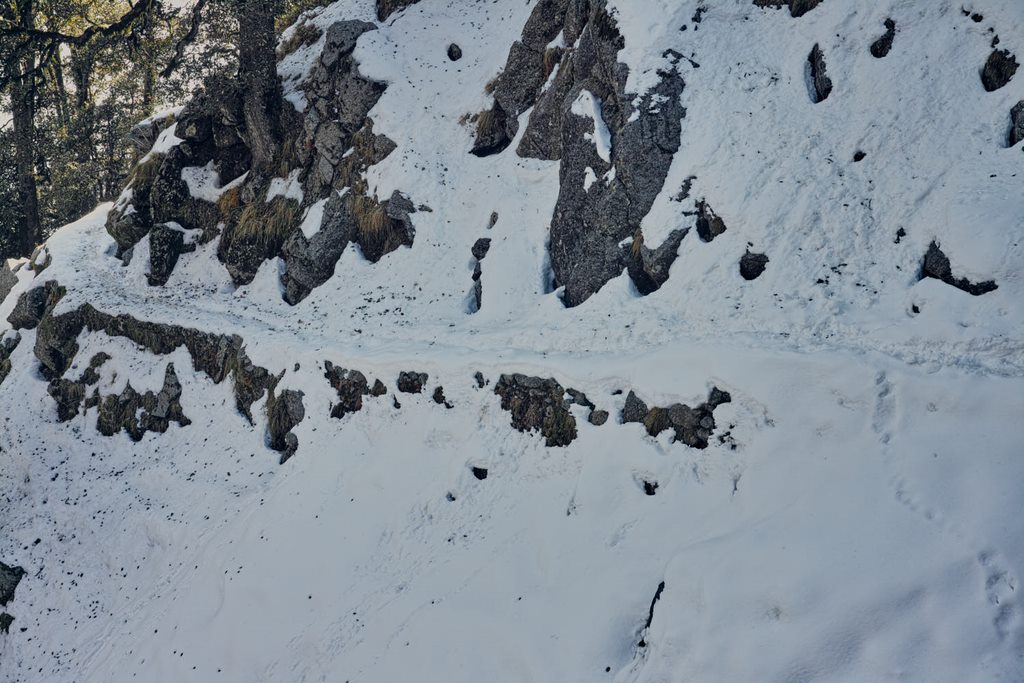 As with most trails in Dhauladhars, the route to Triund is rocky and cut as steps. Boots with relatively stiffer soles fare much better over these rocky trails. A stiffer sole means less foot fatigue over rocky terrain. Before buying new shoes/boots, check it’s sole stiffness. Bend the shoe along the sole, with the toe-box pressed to the ground. The shoe that flexes more, is less stiff. Choose a boot or shoe that flexes less yet is not completely rigid.